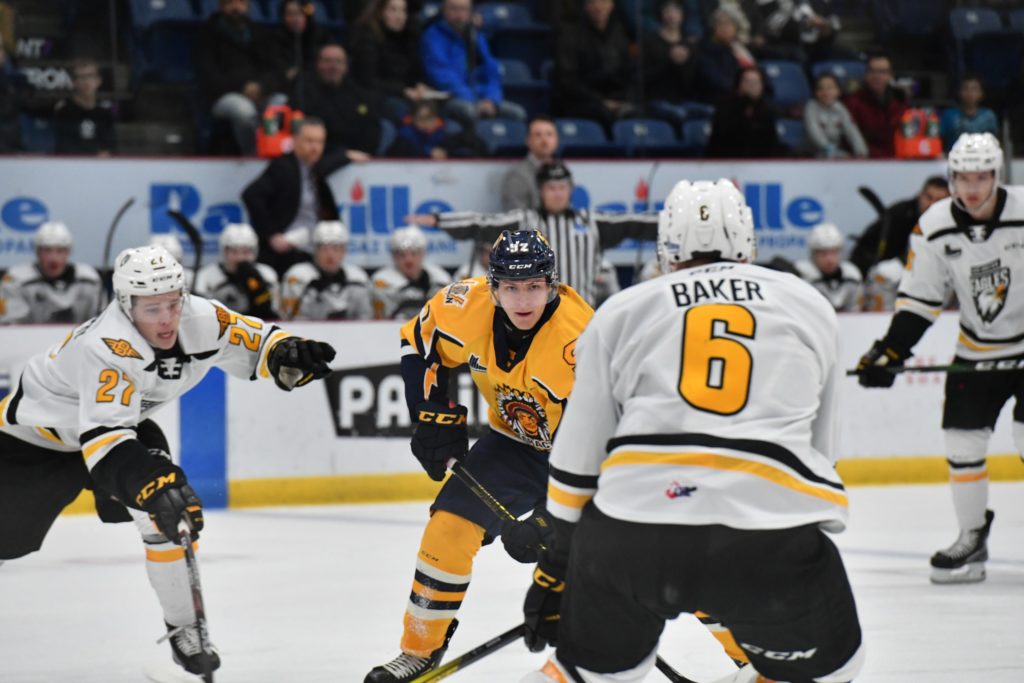 The Cape Breton Eagles fell behind in the first period and were unable to catch up in a 6-3 loss to the Shawinigan Cataractes on Friday night.

The Eagles outshot Shawinigan 15-8 in the opening period (and would outshoot the Cataractes in all three periods) but it was the home side getting on the board first as Xavier Bourgault converted on a drop pass to put the puck over the shoulder of William Grimard. Past the halfway mark of the opening frame, the Shawinigan lead would double on a Mavrik Bourque shot from the top of the left face-off circle.

Special teams would be the story of the final six minutes of the period. Shawinigan defenseman Marc-Antoine Pépin was given a five minute major for a hit from behind on Shawn Boudrias, who would return in the second period but did not appear on the power play in his regular spot. However the Eagles would hit the scoresheet without him as Nathan Larose ripped a shot through traffic to get them on the board.

But the next goal on the five minute major would go to the Cataractes. Moments after being denied on a short handed 3 on 1, there would be no mistake when William Veillette put the Cataractes up 3-1. The goal came on a delayed penalty against the Eagles- the penalty would be nullified by the goal, but the Eagles couldn’t score in the balance of the period and it was a two goal margin at the break.

Both sides would score in the second period. Before the nine minute mark, Brooklyn Kalmikov pulled the Eagles within one with a shot that went off the pad of goaltender Antoine Coulombe and in. Shawinigan countered less than four minutes later when Mikael Robidoux converted a cross-ice pass from Vasily Ponomarev,.

Shawinigan was able to push their lead to three goals for the first time in the game in the third period as Xavier Cormier pushed a shot off the post and in to give the Cataractes a 5-2 edge.

The power play would again become a factor and gave the Eagles an opportunity to get back in the game. Larose converted with another heavy shot on the man advantage to cut the lead to 5-3. Then,with just under three minutes remaining, Shawinigan’s Leon Denny was sent to the penalty box. Eagles coach Jake Grimes called a timeout and put Grimard on the bench for a 6 on 4.

There would be chances, but the Eagles could get no closer. After having killed the penalty off, Ponomarev hit the empty net to make it 6-3 and finish the scoring.

Coulombe stopped 36 of 39 shots in the victory, while Grimard allowed five goals on 23 shots in addition to the empty netter.

The Eagles will finish off the road trip tomorrow night with a visit to Victoriaville to take on the Tigres. Puck drop is at 8 PM Atlantic time and you can hear all the action beginning with the pre-game show with Patrick McNeil at 7:30 on 1270 AM CJCB or online at www.cjcbradio.com

Final Shots On Goal: 39-24 in favour of Cape Breton