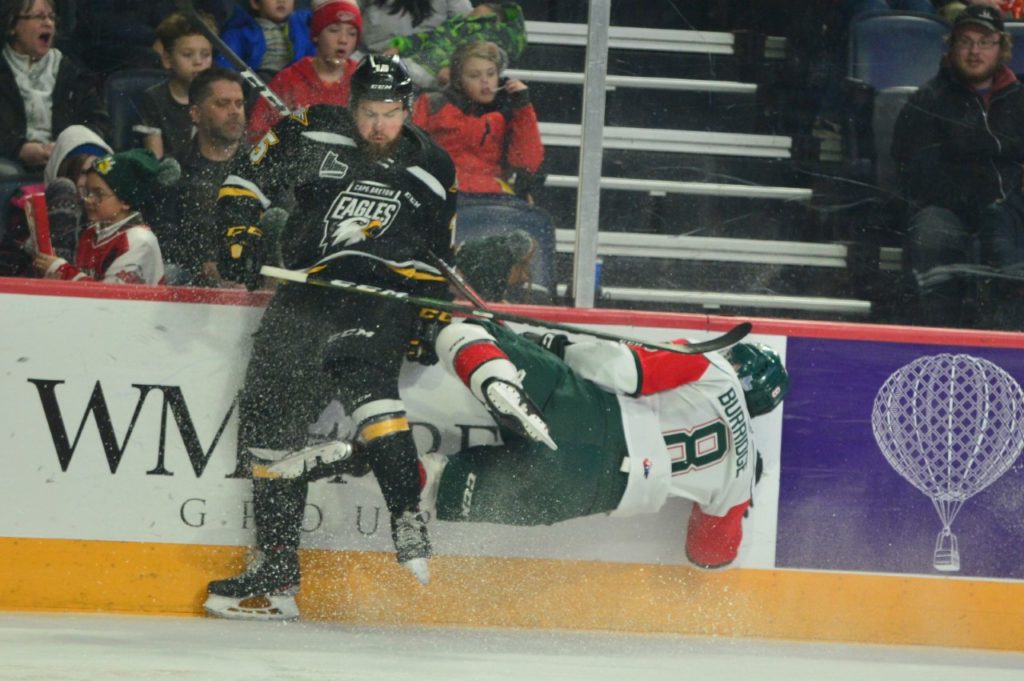 Shawn Element’s hat trick and a strong power play presence helped pace the Cape Breton Eagles to a 5-1 win over the Halifax Mooseheads on Saturday night.

It was actually the Mooseheads who struck first, late in the opening frame on the man advantage. Kevin Gursoy moved the puck from the behind the net out in front to Seena Peters who snapped a shot by Kevin Mandolese with a minute to play in the period, and the Eagles trailed 1-0 after one.

Period two would belong to Shawn Element of the Eagles. In the first half of the period, Element put a shot through the legs of Alexis Gravel, only to have the goal called back because the net was knocked off its moorings. But he’d make up for it- scoring a power play marker similar to the Peters goal, converting a pass from behind the net. Then with less than 30 seconds to play in the period, Kyle Havlena wired the puck the length of the ice, allowing Derek Gentile to get the puck deep in Halifax’s zone and send the puck to Element for his second goal of the period.

The power play was back to work in the third period, as Nathan Larose finished a cross ice pass from Félix Lafrance to make it 3-1. Then it was Larose hammering a hard shot on the power play that was defeated by Element for the hat trick goal. (Gentile also notched an assist on the goal, his fourth of the evening.) In the final two minutes of the game, the Eagles fourth line got in on the action as Logan Camp was able to light the lamp to make it a 5-1 score.

Kevin Mandolese picked up the win in goal, in his 150th game in the QMJHL. He stopped 18 of 19 shots in the victory. Gravel turned aside 41 of 26 shots in the loss.

In the absence of Jarrett Baker & Jérémy Langlois on the blue line the Eagles called up defenseman Jacob Christie for the game. The 17 year old defenseman was a ninth round draft pick in the 2019 draft and posted a +1 rating in the win.

The Eagles finish the weekend with a visit to the Acadie-Bathurst Titan Sunday afternoon at 3 PM. You can hear all the action beginning with the pre-game show with Patrick McNeil at 2:30 PM on 1270 AM CJCB or online at www.cjcbradio.com

Final Shots On Goal: 46-19 in favour of Cape Breton