Eagles Drub Mooseheads In Back End Of Home And Home 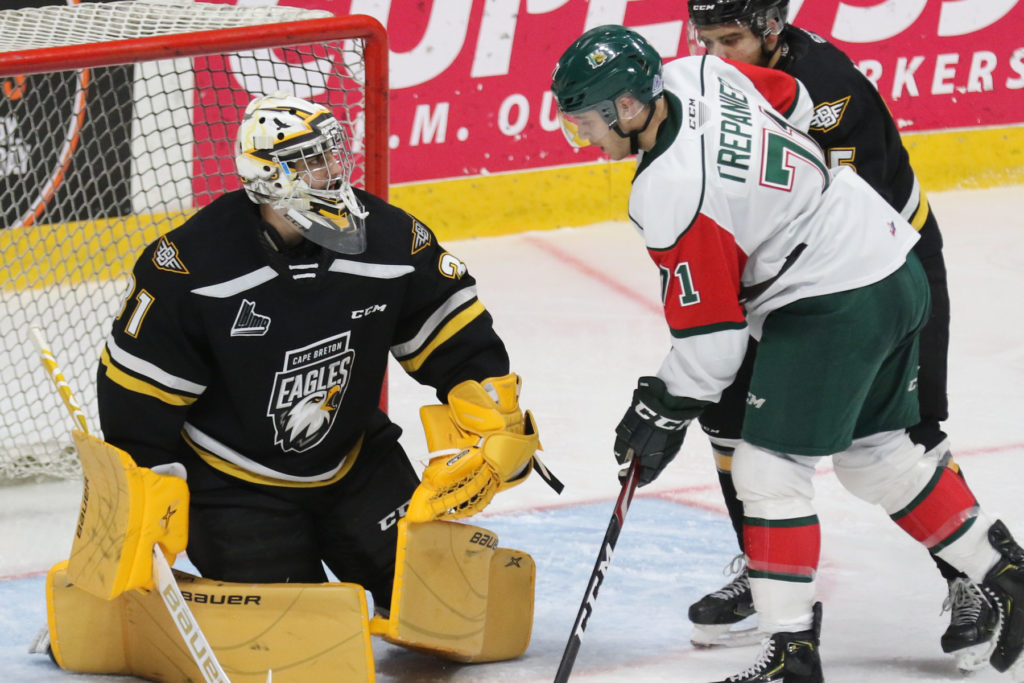 Following a one goal loss in the provincial capital on Friday, the Cape Breton Eagles did not have to wait long for revenge on the Halifax Mooseheads. The Eagles power play came through with three goals in a 5-1 victory on the backend of the home and home.

After a tentative first 13 minutes, the Eagles power play would be the story of the later part of the period. Just 20 seconds into a penalty to Jason Horvath, Derek Gentile fired a shot over the shoulder of Alexis Gravel. Immediately after the penalty, Halifax took a bench minor.

Gavin Hart served the penalty, and he was not long out of the box before Halifax’s Walter Flower took down Ryan Francis. The Eagles once again made Halifax pay, as Egor Sokolov blasted a shot over Gravel and the home team left the period with a 2-0 lead.

Both teams would score at even strength in the second stanza. After the six minute mark, Mathias Laferrière converted on the drop pass from Félix Lafrance to beat Gravel and make it 3-0. Less than two minutes later, Halifax countered as Raphaël Lavoie converted a pass from behind the net from Benoit-Olivier Groulx, sweeping around the crease to beat Kevin Mandolese and break the shutout.

The three goal cushion was restored before period’s end. Shawn Boudrias took multiple whacks at the puck and pushed it over the goal line, giving the Eagles their third power play goal of the night, and 4-1 was the score at the end of 40 minutes.

Halifax would get no closer and the only goal left to be scored in the game belonged to the home side. Boudrias danced through the Mooseheads defence to beat Gravel low along the ice as his second goal of the evening gave the Eagles a 5-1 win. The Eagles outshot the Mooseheads 11-8 in the final frame, winning the shot clock in all three periods.

Mandolese picked up the win in goal for the Eagles, stopping 21 of 22 shots. With William Grimard suffering an injury in Friday’s game, Seth Crowe of the Kameron Jr B Miners served as Mandolese’s backup. Gravel took the loss for Halifax, stopping 34 of 39 shots.

The Eagles will now finish the pre-Christmas portion of the schedule with a three game road trip. It all starts on Wednesday with a visit to the Acadie-Bathurst Titan at 7 PM You can hear all the action beginning with the pre-game show with Patrick McNeil at 6:30 PM on 1270 AM CJCB or online at www.cjcbradio.com