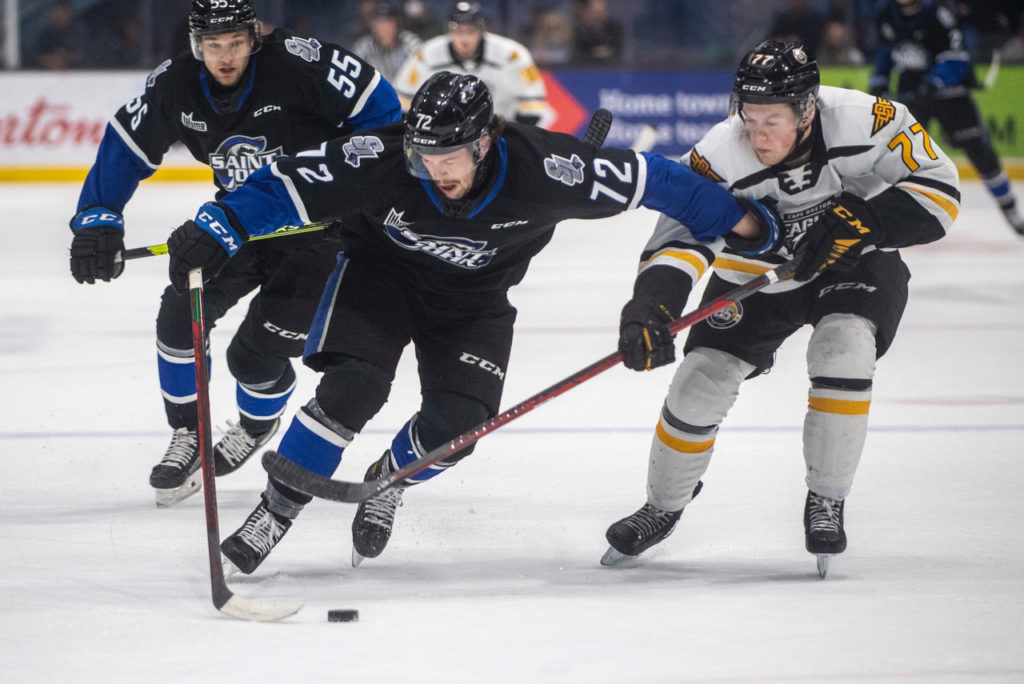 It was a record breaking night to forget for the Cape Breton Eagles in a 14-2 loss in Saint John on Friday night.

Saint John’s exceptional depth shone through in the opening minutes to establish a healthy lead.  Goals 26 seconds apart from the fourth line made it 2-0 for the Sea Dogs just after the three minute mark.  The scoring began with a pass from Olivier Picard to Marshall Lessard in front of the net, and Lessard dropping it back to Peter Reynolds for the finish.  The second goal came from Lessard, and Reynolds made it 3-0 later in the opening frame.

Philippe Daoust added to the Sea Dogs lead with a shot from a sharp angle, and Raivis Ansons ripped it through the legs of Rémi Delafontaine to make it 5-0.  The Eagles got on the board by period’s end though when Peter Repcik buried a rebound by Nikolas Hurtubise.

The Eagles were unable to build any momentum though as Brady Burns found the back of the net in the opening two minutes for Saint John, which spelled the end of the night for Delafontaine.  He was relieved by Xavier Farrah, who was making his QMJHL debut.  The 2005 born netminder was drafted in the sixth round by the Eagles in 2021 draft.

Farrah actually started his appearance well, making multiple saves on a Saint John power play.  However, Reynolds completed his hat trick, followed by the first of two goals on the night from Saint John defenseman Jérémie Poirier.  The Sea Dogs power play would come through as well, making it 9-1 on a goal from Vincent Sévigny just four seconds into their man advantage.

The records were further extended in a sequence that saw activity on the scoresheet that extended beyond goal scoring. Ansons was given a match penalty for high sticking with 2:12 to play.   The power play didn’t last until the end of the game, however, as Émile Hegarty-Aubin was given a penalty for charging.  Reynolds scored his fourth of the night, four on four, to finishing the scoring.

Hurtubise picked up the win in goal, stopping 18 of 20 shots.  Delafontaine took the loss, allowing six goals on 19 shots, while Farrah stopped 22 of 30 in relief.

The Eagles will now head home for the final game of the 2021-22 season against the Halifax Mooseheads. Prior to the game the Eagles will honour outgoing 20 year old players Nicholas Girouard, Émile Hegarty-Aubin, and Sean Larochelle.

Game time is 3 PM on Sunday. Tickets can be purchased at https://www.ticketmaster.ca/cape-breton-eagles-tickets/artist/891825. They are also available for purchase in person at the Centre 200 box office and by the phone during box office hours at 902-564-2200

Final Shots On Goal: 49-20 in favour of Saint John