Eagles Dropped By Mooseheads In Second Half Of Back To Back 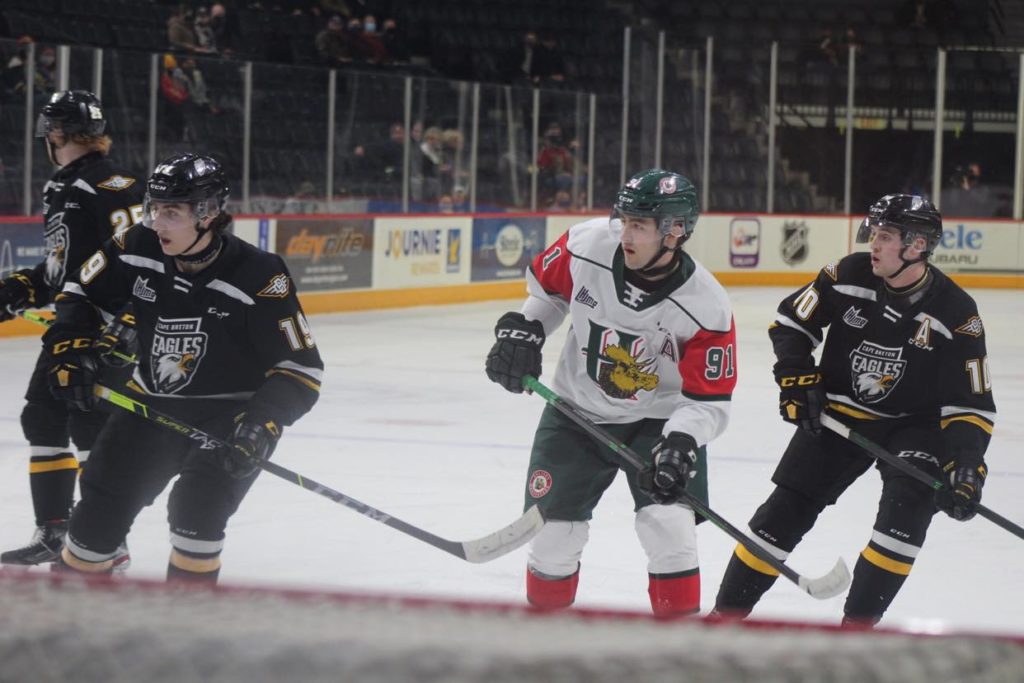 The Cape Breton Eagles were unable to come up with a win in a back to back against Halifax, falling 6-1 to the Mooseheads on the mainland on Thursday.

It was a tentative start to the game as the teams combined for just one shot in a first period that was played entirely five on five. Not long after there would be a breakthrough when Landon Miron converted a cross ice pass from Bobby Orr and put it by Nicolas Ruccia from the right face-off circle to make it 1-0. Halifax had a great opportunity to score late in the period as well, but Ruccia denied Zach Jones on a breakaway.

The Eagles tied the game before the six minute mark of the second period, with a well executed Émile Hegarty-Aubin tip on a Jarrett Baker point shot. Ruccia would then keep the game tied for the Eagles with a sensational stop on Senna Peeters, denying the Belgian forward with a big glove grab after a cross-crease pass from Jones.

He was not able to keep it tied for much longer as Elliot Desnoyers was able to cash in on a pass from behind the net by Jordan Dumais. Desnoyers found the back of the net again with a big shot between the two face-off circles and it was a 3-1 contest.

Halifax thought they had a fourth goal with ten seconds remaining in the second period, when Dumais found Zachary L’Heureux streaking up the left wing and and L’Heureux tipped his pass by Ruccia. But after a review it was determined the play was offside.

The Eagles had a chance to get back into the game with the disallowed goal and an early third period power play. However, it was Halifax taking advantage as Desnoyers finished a short handed breakaway with a backhand deke. Less than three minutes later, L’Heureux scored to make it 5-1. Halifax finished the scoring with a power play marker as a series of precision passes finished with a Cameron Whynot shot to make it a 6-1 final for the Mooseheads.

Alexis Gravel picked up the win, stopping 22 of 23 shots, while Ruccia took the loss, turning aside 32 of 38 shots in the defeat.

For the second straight night Eagles affiliate forward Kian Bell and backup goaltender Noah Harvey dressed for the club, and defensemen Michael McQuaid & Matthew Power were called up for Thursday’s game. The Eagles played with 17 skaters as forward Félix Paré, who took warmup, sat out for precautionary reasons with an upper body injury.

The Eagles will now head to Charlottetown for Sunday afternoon action against the Islanders. Puck drop is at 4PM and the game will be broadcast on Eastlink Television. You can also hear all the action beginning with the pre-game show with Patrick McNeil at 3:30 PM on 1270 AM CJCB or online at www.cjcbradio.com

Final Shots On Goal: 38-23 in favour of Halifax