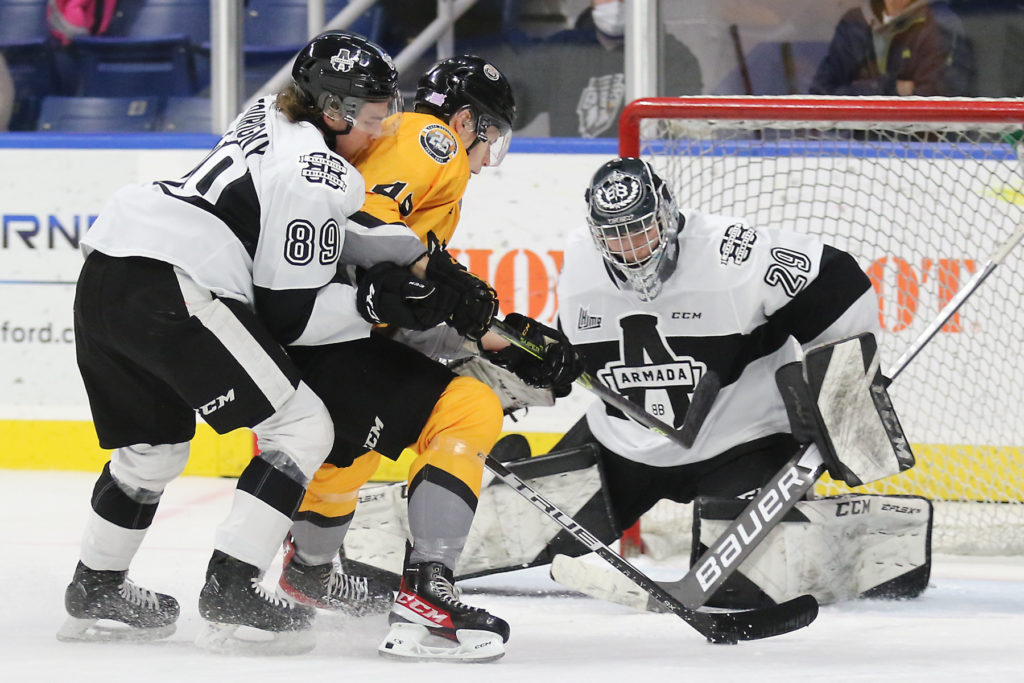 It wasn’t the start to a two game home stand the Eagles were looking for in a 7-1 defeat against the Blainville-Boisbriand Armada.

After a tentative opening two minutes, the Armada struck first on a fortunate bounce and the first shot of the game- Simon Lavigne tried to play the puck to to the front of the net, but likely wasn’t complaining when it bounced off an Eagles defenseman and past Rémi Delafontaine.  Lavigne’s defense partner Miguël Tourigny was next in on the action, putting a shot over Delafontaine’s glove to make it 2-0 before the six minute mark.

Blainville-Boisbriand’s top defense pair would hit the boxscore again before period’s end- but this time the Eagles advantage.  Just six seconds into a minor penalty to Tourigny, Eagles defenseman Jacob Squires put a low shot through a screen and halved the deficit, making it a 2-1 score.  However, the Armada would kill off a later penalty to Lavigne, and left the period up 3-1 after Mikaël Denis finished a cross crease pass from Connor Richard.

There was no scoring in the first 15 minutes of the second stanza, but the visitors stretched their lead thanks to some persistence from Charles Boutin.  Boutin was denied on a nice pad save by Delafontaine, then proceeded to put his own rebound off the post.  The third time was the charm as Boutin beat the Eagles keeper to make it 4-1.

The Eagles had a big opportunity to get back into the game in the final three minutes of the period, as Anri Ravinskis and Colby Huggan were each given minor penalties, creating a full two minute 5 on 3 for the home side.  Alas the Eagles couldn’t produce much in the way of chances and the period finished 4-1.

Blainville-Boisbriand was able to take advantage of their first power play of the night when it came in the third period- with Lavigne and Jack Campbell already in the box, it created a 4 on 3 situation when Jérémy Langlois was sent off for interference.  Tourigny notched his second goal of the game and it was 5-1 Armada.  A Simon Pinard goal and a fortunate bounce that saw credit go to Denis finished the scoring for the night at 7-1.

Due to an injury to captain Sean Larochelle and Emile Perron being away at the Capital City Challenge, the Eagles recalled defenseman Preston Pattengale from the Sydney Rush.  In his QMJHL debut, Pattengale was -1 and registed one hit.  He was given increased ice time in the third period after Jacob Squires took a shot off the knee (Squires is expected to return to action on Sunday.)

Charles-Édward Gravel picked up the win, stopping 26 of 27 shots.  Delafontaine took the loss, stopping 41 of 48.

The Eagles are next in action on Sunday afternoon when they host the Rouyn-Noranda Huskies at 3 PM.  It’s the only visit the Huskies will make to Centre 200 this season. Tickets can be purchased at https://www.ticketmaster.ca/cape-breton-eagles-tickets/artist/891825. They are also available for purchase in person at the Centre 200 box office and by the phone during box office hours at 902-564-2200

Final Shots On Goal: 48-27 in favour of Blainville-Boisbriand