Eagles Doubled By Sags In Chicoutimi 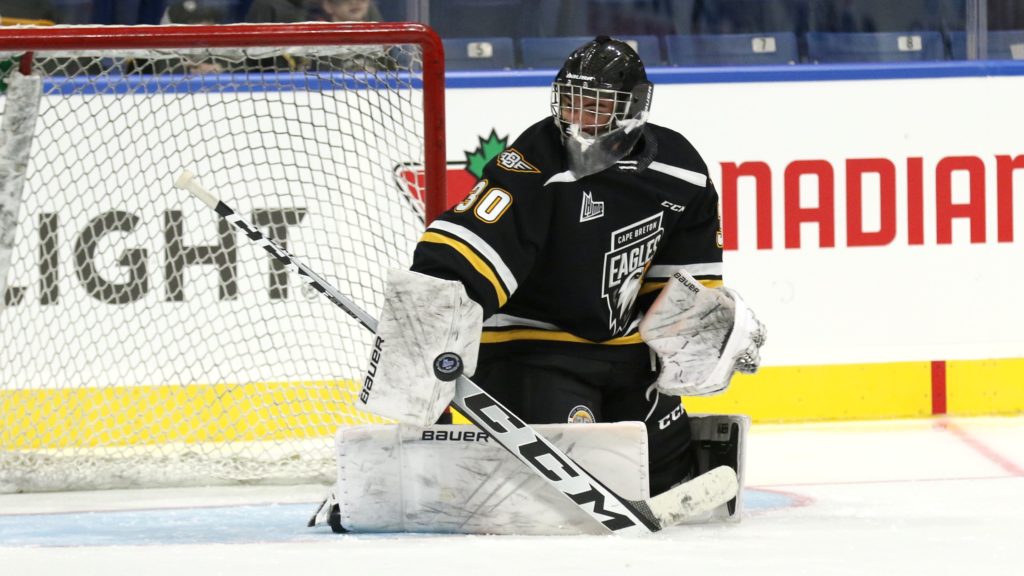 The Cape Breton Eagles got off to a fast start but couldn’t sustain it in a 4-2 loss to the Saguenéens in Chicoutimi late on Saturday afternoon. The Sags rallied from 2-1 to capture a 4-2 victory.

It did not take long for the Eagles to open the scoring- just 43 seconds into the game, Dawson Stairs converted a drop pass from Ivan Ivan to make it 1-0 for the Eagles. Before the five minute mark, Matej Kaslik swept around the crease to beat Rémi Delafontaine and tie the game.

The Eagles reclaimed the lead on a power play goal- another Stairs snipe, this one set up by Conor Shortall. Shortall was playing on the top power play unit in the absence of Sean Larochelle, as the Eagles were missing all three 20 year old players due to injury. Before the end of the period, Jacob Newcombe equalized the score after finishing a cross-ice pass from Félix Lafrance.

The goal scoring wasn’t as plentiful in the middle stanza but Lafrance found his way on the scoresheet when he swatted the puck at the side of the net and cashed in on his own rebound. The Sags outshot the Eagles 22-6 in the second period, but thanks to Delafontaine’s efforts it remained a 3-2 game.

The score remained the same through the first 11 minutes of the third period, until Alex Blais found himself alone in front of the goal and put it through the legs of Delafontaine. Things went from bad to worse for the Eagles when Cam Squires was sent off for tripping in the final five minutes.

But before his penalty could finish, Chicoutimi was caught with too many on the ice which turned a 5 on 4 disadvantage into a 6 on 4 once Delafontaine was lifted for an extra attacker. The Eagles couldn’t pull any closer with the numerical advantage and the game finished with a 4-2 score.

It was the first time Lafrance played against the Eagles after being traded last year, a deal with saw Delafontaine’s rights head to Cape Breton. And at the end of the game on Saturday, they were named stars one and two.

The Eagles will finish their Quebec road trip tomorrow afternoon in Baie-Comeau. Puck drop is at 2 PM Atlantic time. The game is available for purchase online at https://watch.chl.ca. You can also hear all the action beginning with the pre-game show with Patrick McNeil at 1:30 PM on 1270 AM CJCB or online at www.cjcbradio.com

Final Shots On Goal: 50-24 in favour of Chicoutimi