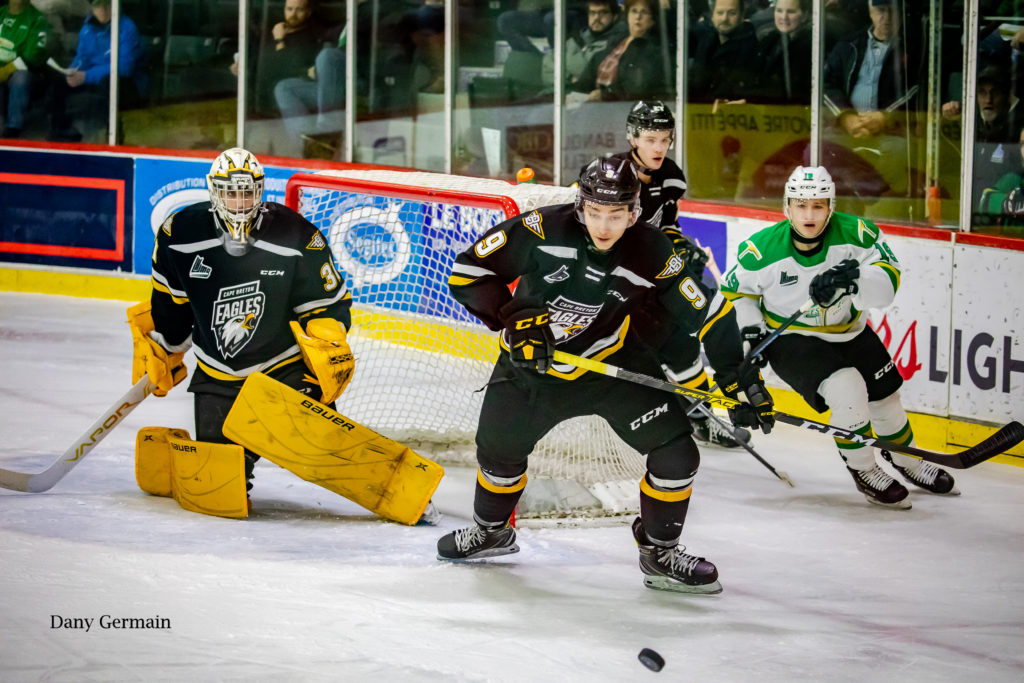 The Cape Breton Eagles resumed their road trip on a winning note with a 4-2 victory in Val-d’Or Foreurs on Wednesday night.

The Eagles came out of the gate flying, outshooting the Foreurs 9-0 before the three minute mark. It paid off with a goal from Félix Lafrance at 2:06. Before the halfway mark Egor Sokolov zapped a shot by Jonathan Lemieux for his 40th of the season, making it a two goal deficit.

Val-d’Or would shake off their early struggles and get back into the game- a set play off the face-off cut the advantage in half. Jérémy Michel picked up the puck from a pass off Justin Robidas after a face-off win and made it a 2-1 score which would hold after the first period.

The score would hold after the second period as well, as the Eagles outshot the Foreurs 11-8 in the middle frame but neither time could beat Lemieux of Kevin Mandolese. There was little in the way of special teams play in the opening 40 minutes with Val-d’Or scoring on the only two power plays.

The Foreurs were given a third man advantage early in the third period as Xavier Bouchard sent the puck over the glass, but they couldn’t capitalize. Shortly after killing off the penalty, Shawn Boudrias set up Mathias Laferrière to push the lead to 3-1.

Cape Breton finally went to the power play in the final eight minutes of the game, and took advantage- Shawn Element redirected a shot from Jarrett Baker to make it a 4-1 lead. There was another power play goal- in the dying seconds of the game by Val-d’Or’s Marshall Lessard- but it wouldn’t change the outcome as the Eagles skated to a 4-2 victory.

Mandolese stopped 31 of 33 in the victory, while Lemieux turned aside 38 of 42 in the loss.

The Eagles played the entire third period with 11 forwards. Sokolov was hit by a puck in the second period and did not return to action, and his status for tomorrow’s game in Rouyn-Noranda isn’t known at the time.

The Eagles will continue the road trip tomorrow night in Rouyn-Noranda as they visit the Huskies. You can hear all the action beginning with the pre-game show with Patrick McNeil at 8 PM on 1270 AM CJCB or online at www.cjcbradio.com

Final Shots On Goal: 42-33 in favour of Cape Breton