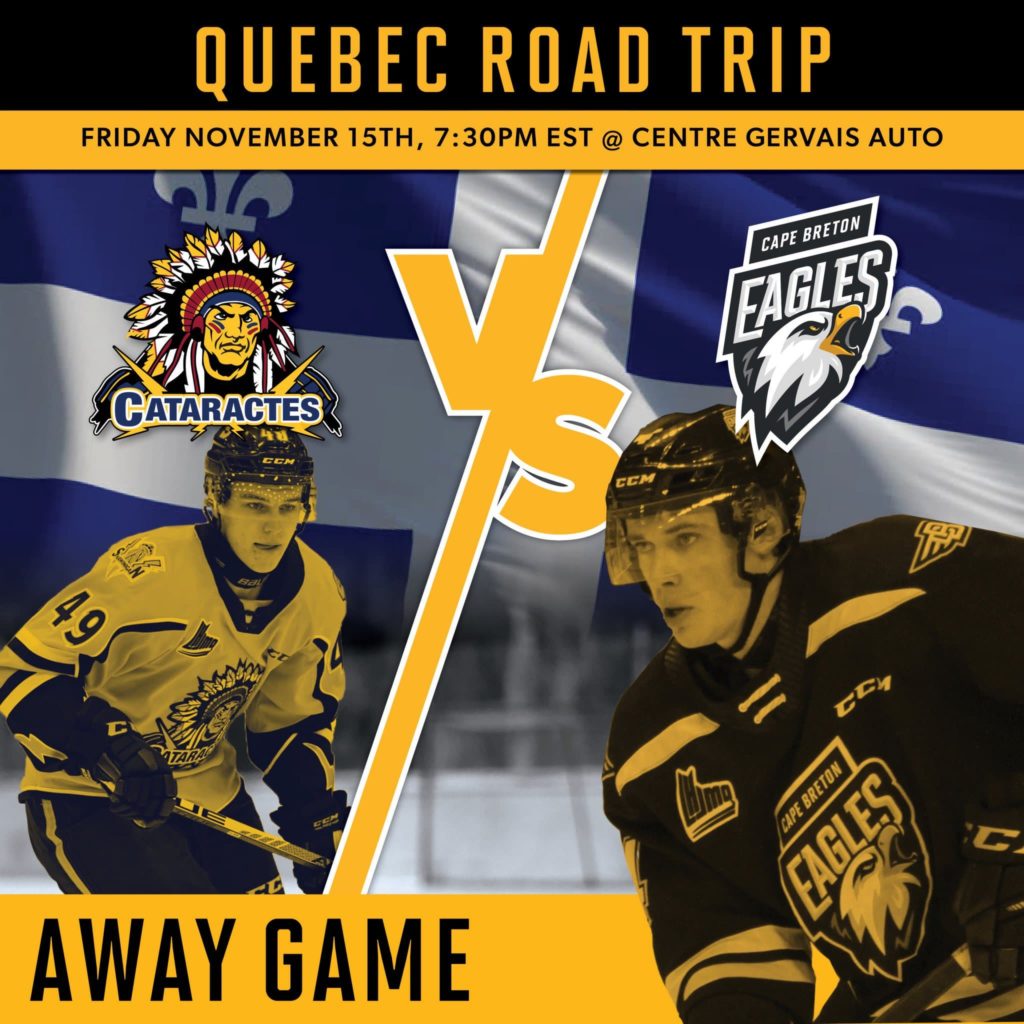 A three in three road trip for the Cape Breton Eagles continues tonight in Shawinigan as the Eagles have their first meeting of the season with the Shawinigan Cataractes. The Eagles are coming off a 6-1 loss in Sherbrooke last night in which the Eagles actually outshot the Phoenix in all three periods. Shawinigan was most recently in action Tuesday night when they topped the Saint John Sea Dogs 8-5.

The race in the Eastern Conference continues to be tight among the league’s top teams, as the Eagles are tied for fourth place with Charlottetown, with a game in hand on the Islanders. (Both are just one point back of third place Rimouski.) The Eagles have a record of 13-7-1, and 6-3-1 on the road. Tonight is the first of two meetings between the Eagles and Cataractes- last season the Eagles won both games between the two sides, with the win in Shawinigan coming in overtime.

While the Eagles have been consistent from home to away ice, Shawinigan has been decidedly better at home. The Cataractes are sixth in the Western Conference with a record of 9-11, but are 6-4 at home. One decided difference has been the power play: Shawinigan ranks 11th on the man advantage overall with a conversion rate of 19.4 but they hold the third best home ice power play at 28.6%.

Players from both teams received good news yesterday when NHL Central Scouting released its most recent “players to watch” list, a ranking of players for the 2020 NHL Draft. Cape Breton and Shawinigan were two of only four QMJHL teams to have at least three players listed. Eagles forwards Ryan Francis & Ivan Ivan along with goaltender William Grimard received “C” rankings, indicative of a player expected to be chosen in rounds four through six.

Shawinigan forwards Mavrik Bourque (who is currently on a five game goal scoring streak) and Vasily Ponomarev both received “B” grades, indicative of a player expected to be selected in round two or three. Defenseman Marc-Antoine Pépin received a “C” grade.
There is one player already drafted in the NHL- Arizona draftee Valentin Nussbaumer, who has 15 points in 20 games. (Bourque leads the team with 29 points in 19 contests.)

The Eagles will also likely see the QMJHL debut of Kirill Nizhnikov. The 19 year old cleared OHL waivers after having played ten games with the Owen Sound Attack this year. He was previously chosen 7th overall in the 2016 OHL draft but despite offensive flashes (including four goals in Owen Sound) he has been unable to stick with any team for any length of time.

Cape Breton will hope to get healthier ahead of this evening’s game. Last night Mathias Laferrière was a last minute scratch due to illness, while Shawn Boudrias sat out the last nine minutes of the game with an apparent upper body injury. The club is already without forward Cole Fraser, Defenseman Adam McCormick and goaltender Kevin Mandolese on this road trip.

Puck drop for tonight’s game is at 8:30 PM Atlantic, and you can catch all the action beginning with the pre-game show at 8 with Patrick McNeil on 1270 CJCB (or online at cjcbradio.com). Go Eagles Go!