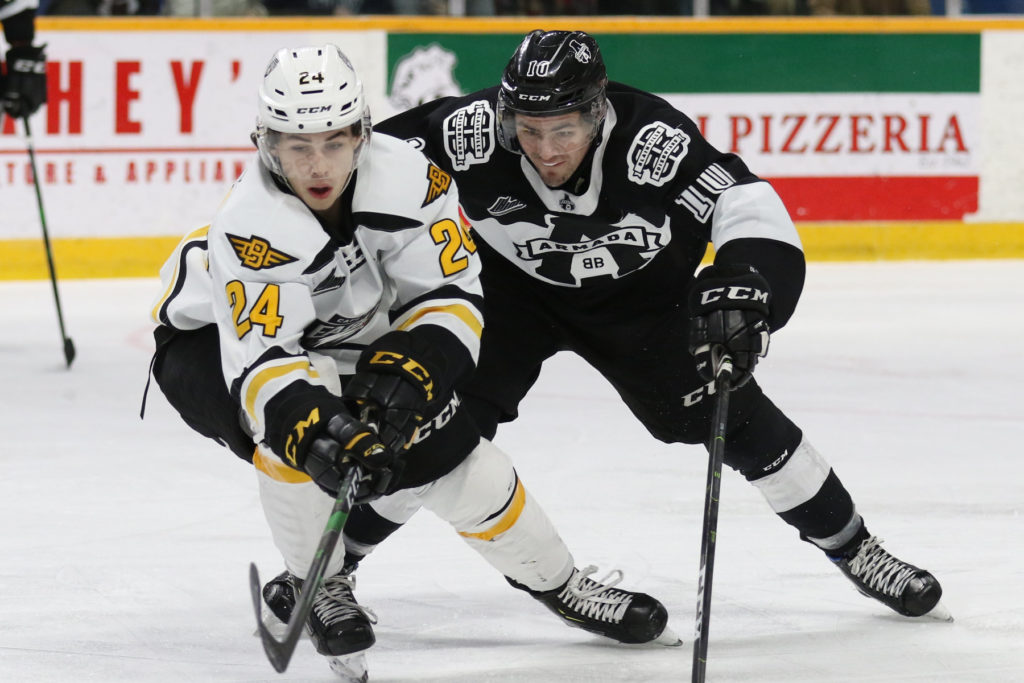 Following the end of a seven game winning streak on Friday night in Quebec City, the Cape Breton Eagles won’t have to wait long to try to start another one. This afternoon the Eagles road trip continues in Blainville-Boisbriand against the Armada.

Prior to last night’s games, the Eagles and Armada held the two best winning percentages in the second half of the QMJHL season, with the Eagles going 14-1 and the Armada going 12-4 since the resumption of play after the Christmas break. But neither found the back of the net on Friday with the Eagles falling 3-0 to the Remparts and Blainville-Boisbriand being shut out at home 4-0 to Moncton.

Coming into tonight’s game the Eagles are fourth in the Eastern Conference with a record of 31-15-3 (11-9-2 on the road). The Eagles are four points back of Rimouski for third place and trail Moncton by six for the Maritime Division lead. Blainville-Boisbriand leads the West Division at 28-19-3 (15-8-1 at home). It’s the second and final meeting of the season between the two teams.

The Eagles won a wild one, 7-5, at Centre 200 on January 23rd. Egor Sokolov was the story with a four goal performance (last night Sokolov saw his league leading 15 game point streak come to an end.). On that night the Eagles were able to chase the steady Emile Samson (907 save percentage) from the Armada net.

Kevin Mandolese was not in goal for the Eagles on that occasion, but since has moved up to having the top save percentage in the league at 921. The depth in front of Mandolese was tested in the loss to the Remparts, with Nathan Larose not on the road trip while Jarrett Baker was unavailable for a large part of the game.

In addition to getting goaltending from Samson, 20 year olds are important to the success of the Armada as forward Antoine Demers has six points in his last six games while Yann-Félix Lapointe has been among the leading point getters for defensemen in the second half of the season. Up front, 19 year old Luke Henman remains unsigned by Carolina but has notched 29 points through his last 17 games.

Puck drop for tonight’s game is at 5:00 PM Atlantic time, and you can catch all the action beginning with the pre-game show at 4:30 with Patrick McNeil on 1270 CJCB (or online at cjcbradio.com). Go Eagles Go!