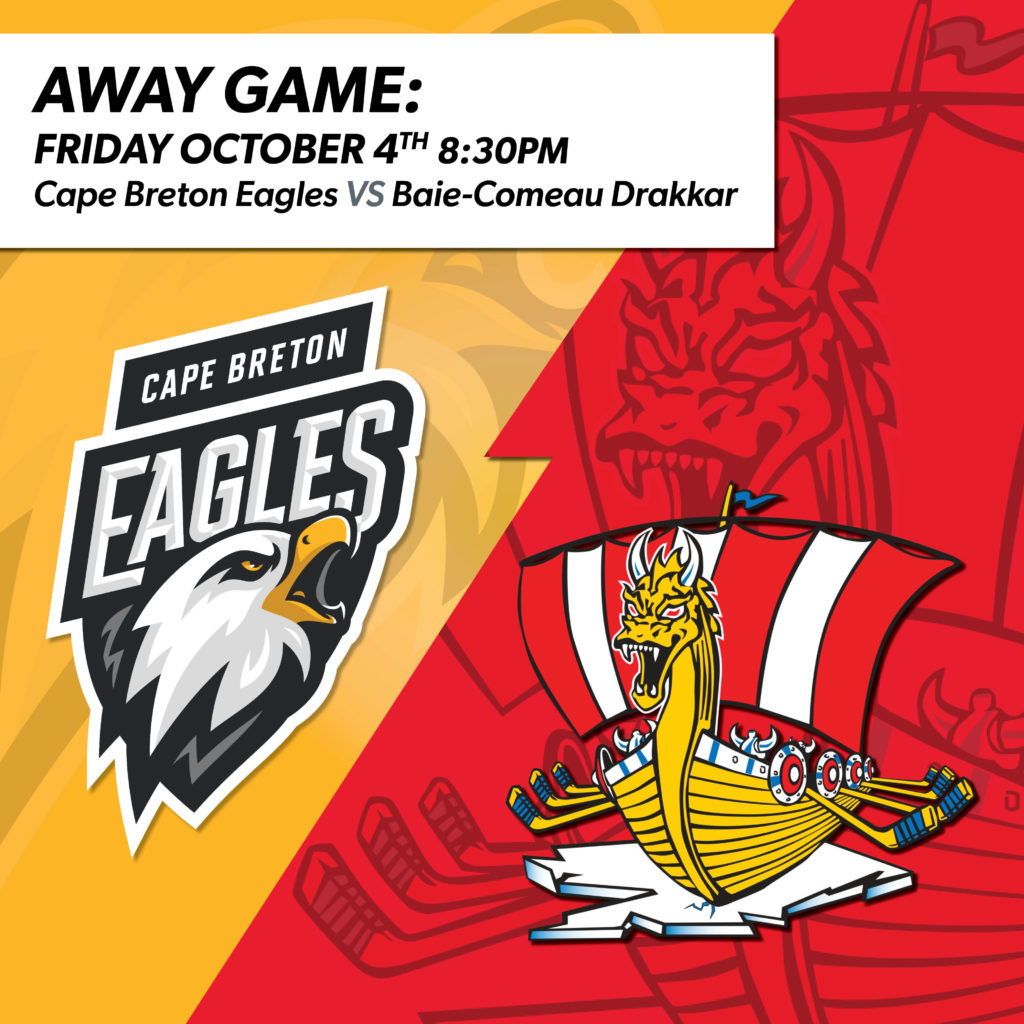 The Cape Breton Eagles will continue their first Quebec road trip of the season with a visit to Baie-Comeau to take on the Drakkar. The Eagles come into the contest with a 4-1 record and are looking to rebound from their first loss of the season on Wednesday, a 9-2 loss in Rimouski. Baie-Comeau, who has a record of 2-2-1, is coming off a 6-2 defeat at home to Victoriaville.

Tonight’s game features a battle between two of the QMJHL’s three rookie head coaches this season. Cape Breton’s Jake Grimes won the OHL championship as an assistant coach with Guelph last season. Baie-Comeau’s Jon Goyens is making his QMJHL debut this season after a ten year stint with the Lac St-Lous Lions of the Quebec Midget AAA league, where he twice won the league title.

One player familiar to Eagles fans should be in the Baie-Comeau lineup. In the off-season the Eagles sent Gabriel Proulx to Baie-Comeau, and thus far he has two assists in five games. Earlier this week the Drakkar acquired forward Charles-Antoine Giguère, which gives the club four 20 year olds. It’s unlikely Proulx would be the odd man out given that he’s wearing an “A” as an alternate captain this season.

Baie-Comeau has three NHL drafted players in their lineup: captain Gabriel Fortier (Tampa Bay), defensemen Xavier Bouchard (Vegas), and Nathan Légaré, who recently signed a contract with the Pittsburgh Penguins after a tremendous NHL training camp. Légaré has four points in three games since his return.

Egor Sokolov continues to be near the top of the leader board in the QMJHL for the Eagles after a two point outing on Wednesday, as his 11 points rank him in a tie for second place in the QMJHL. Forward Félix Lafrance also remains at an over a point per game pace after he also scored in the game in Rimouski on Wednesday night.

This will be the only visit of the season by the Eagles to Baie-Comeau. Last season the two teams met twice, with the home team winning each team, with the Eagles victory coming in overtime.

Puck drop for tonight’s game is at 8:30 PM, and you can catch all the action beginning with the pre-game show at 8 PM with Patrick McNeil on 1270 CJCB (or online at cjcbradio.com). Go Eagles Go!