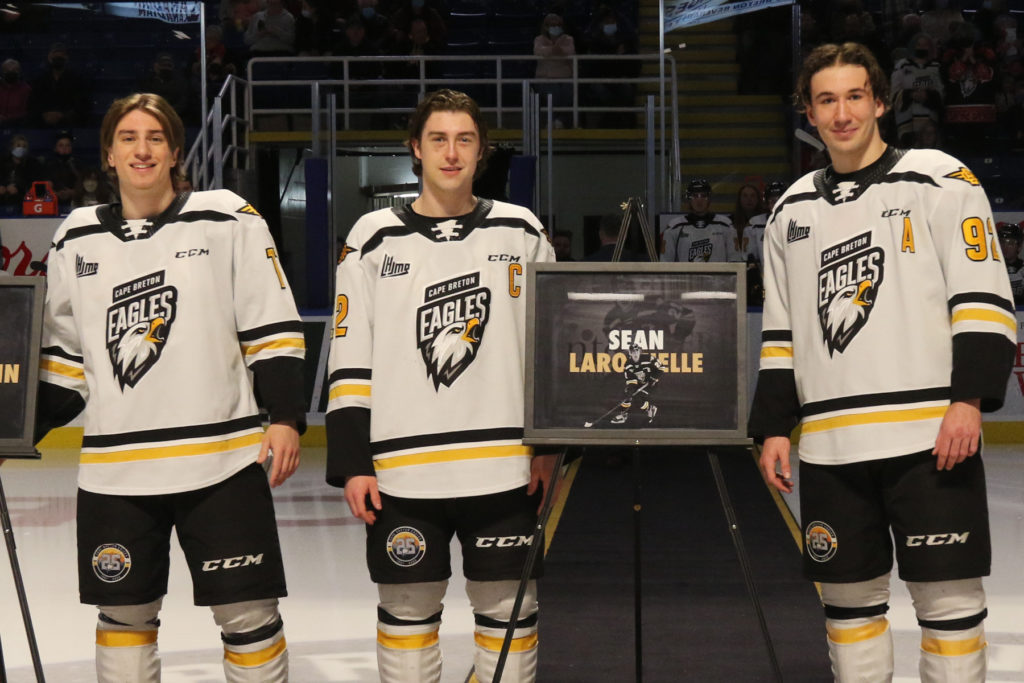 The Cape Breton Eagles pushed until the last minute but couldn’t find a way to finish the comeback against the Halifax Mooseheads in the final game of the season, as the Mooseheads captured a 5-4 victory at Centre 200.

The opening minutes didn’t give any indication of a high scoring game, as there was just one goal in the first period.  Rookie Halifax defenseman Dylan MacKinnon scored the first of his QMJHL career with a shot through traffic.

Halifax captain Elliot Desnoyers doubled the lead before the halfway mark of the second stanza, and not long after was denied on a spectacular glove save by Nicolas Ruccia.  The Mooseheads would really break the game open in the last four minutes of the period, as three goals were scored in a three minute span.

It started with a beautiful individual effort from Jordan Dumais to create space for himself and put the puck by Ruccia to make it 3-0.  A power play marker by Zack Jones pushed the lead to 4-0, and then a video review would give Logan Crosby a goal in the final minute of the third period.

Things looked bleak for the Eagles heading into the third period, but even before the comeback really heated up there were some special moments as both 20 year old forwards Nicholas Girouard & Émile Hegarty-Aubin hit the back of the net in their final QMJHL games.  Girouard’s goal came at the 4:38 mark, and then Hegarty-Aubin finished a passing play at 7:23 to make it 5-2.

Fans at Centre 200 were hopeful that Carter McCluskey had drawn a penalty with some good work rushing up the wing, but no penalty was given and things became worse for the Eagles when they were called for too many men on the ice.  On the same sequence, Eagles defenseman Conor Shortall was given an instigator penalty for his fight with Halifax’s James Swan, and the Eagles were faced with a two minute 5 on 3 disadvantage.

Despite Desnoyers & Dumais staying out for the entire two minutes, the Eagles killed off the penalty. Another wrench was thrown in the comeback attempt in the final five minutes when Charles Savoie was called for tripping, but some good work from Girouard drew a penalty to create a four on four situation.

With open ice to work with, Eagles coach Chadd Cassidy elected to lift Nicolas Ruccia to create a five on four.  Cam Squires was able to find the back of the net with one second remaining in the four on four sequence, making it a 5-3 game and giving the Eagles an abbreviated power play which turned into a 6 on 4 when Ruccia headed to the bench again.

The Eagles wouldn’t score on the abbreviated power play but continued to pressure with Ruccia out.  Squires’s second of the period created a one goal game with just 38 seconds remaining.

Following a centre ice face-off, Ruccia raced to the bench once more when the Eagles gained entry into the Halifax zone.  But there proved to not be time for one more goal as Halifax clinched fifth in the Eastern Conference with the win, while the Eagles missed the playoffs for only the third time in club history.

With the season coming to its conclusion, the Eagles will now look forward to the CHL Import Draft on July 1st and the QMJHL Entry Draft on July 4th & 5th. The Eagles are also awaiting on the upcoming QMJHL draft lottery, in which they will have the best chance of earning the top pick. Stay tuned to all Cape Breton Eagles social media for all updates regarding the team. Thank you for your support this season and we will see all you in the new season!

Final Shots On Goal: 37-36 in favour of Halifax