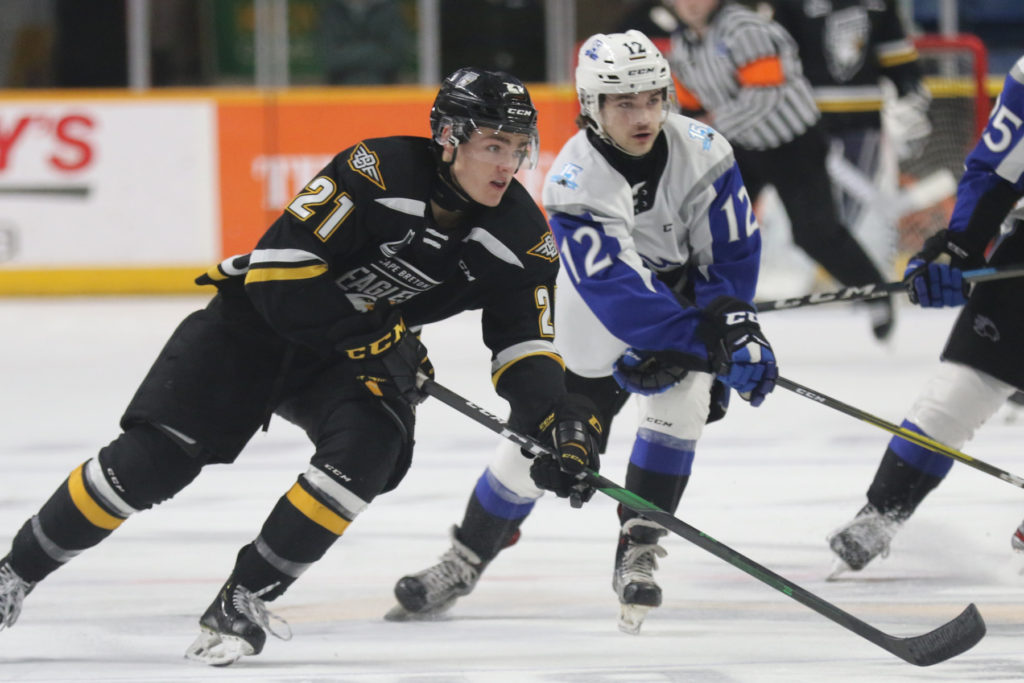 The Eagles scored first, and then rallied, but ultimately fell short in a 4-3 shootout loss to the Saint John Sea Dogs.

Egor Sokolov started the scoring just before the eight minute mark, ripping a shot by Saint John netminder Zachary Bouthillier. The Eagles were then faced with a challenge when Connor Trenholm was sent off for four minutes for high sticking.

It looked like the Eagles were out of the woods when Saint John was whistled for a too many men on the ice penalty. But it was the Sea Dogs who would take advantage of the open ice at 4 on 4 when Jérémie Poirier sprung Nic Guay for a breakaway. Guay buried the puck past Ewan MacDonald, who was making his first start in the QMJHL, to tie the contest.

Guay found the back of the net again four minutes later, flipping it over the shoulder of MacDonald to put visitors ahead. Late in the period, after a goal mouth scramble, the puck found its way to Brady Burns at the top of the right face-off circle on a one timer and he pushed the lead to 3-1 with just three seconds left in the period.

Saint John bottled up the ice in the early part of the second period, making it difficult to generate opportunity. But the Eagles were able to open things up a bit as the middle stanza moved on- outshooting Saint John 17-4.

The breakthrough came when the Eagles drew their first full man advantage of the night. With Matt Gould in the box for holding, Sokolov ripped a shot through a Shawn Boudrias screen to make it a 3-2 game. It was a one goal deficit heading into the second break.

Before the the third period was half over the Eagles had their tying goal. Shawn Boudrias drove the net and was denied by Bouthillier. However he picked up the rebound behind the net and with the Saint John goaltender down, flung the puck out to Ryan Francis. Francis slid the puck over the goal line and it was a tie game.

Both teams would have big opportunities to break the tie. Immediately off the post-goal face-off, Maxim Cajkovic elected to shoot out on a two on one but MacDonald made the save. In the aftermath the Eagles net minder was bumped by Guay, who’d be given four minutes in penalties while Kyle Havlena was sent off for two.

Cape Breton continued to pour shots on the Saint John net, outshooting the visitors 7-2 in the overtime period. Neither team could trigger the red light and for the second time in three games the Eagles headed to a shootout.

Neither team could solve the goaltenders in the opening two rounds, making it an early sudden death situation. In round three Jérémie Poirier fired the puck by MacDonald, and when Mathias
Laferrière was denied by Bouthillier it gave Saint John the victory.

Bouthillier stopped 48 of 51 shots in picking up the victory. MacDonald turned aside 20 of 23 in the loss. It was the first QMJHL appearance for MacDonald, an 18 year old goaltender for the Edmunston Blizzard, who had served as a backup netminder in the bulk of the Eagles recent outings.

The Eagles are back in action tomorrow night at 7 PM as they host the Shawinigan. It’s the only visit of the season the Cataractes will make to Sydney. Tickets can be purchased at the Centre 200 box office, by phone at 902-564-2200 or online at https://tickets.capebreton.ca/Online/default.asp

Final Shots On Goal: 51-23 in favour of Cape Breton