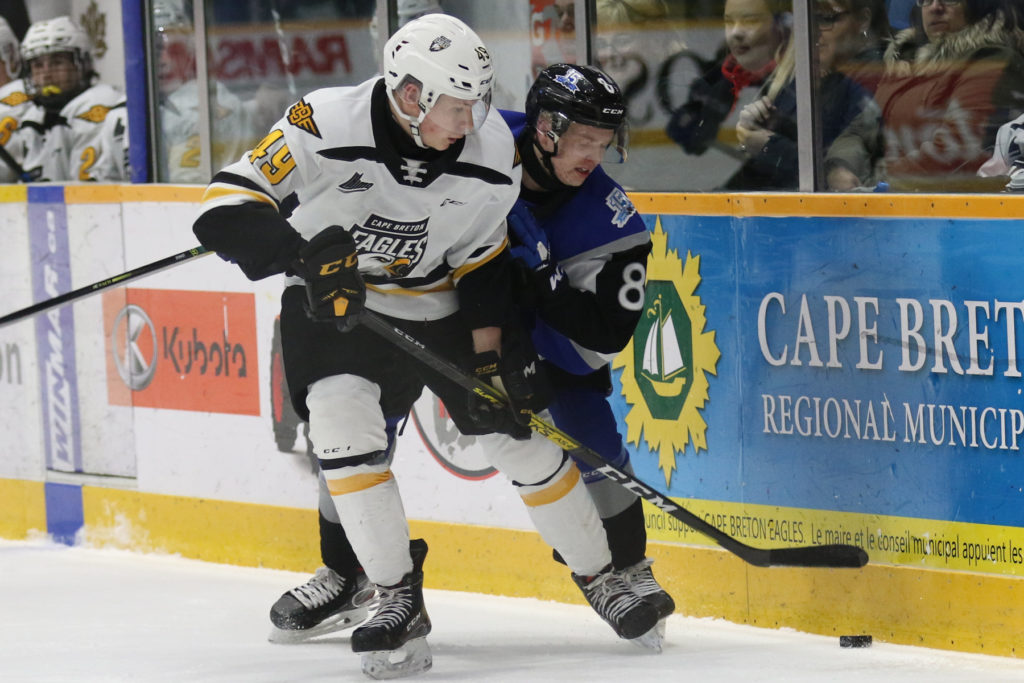 The Cape Breton Eagles are looking to start a new home ice winning streak as the team takes on the Saint John Sea Dogs this evening at Centre 200.

This season saw the Eagles set a record with twelve consecutive wins on home ice before a 4-2 defeat against the Acadie-Bathurst Titan on Wednesday night. The Eagles will also be looking to make ground on the idle Rimouski Océanic, who Cape Breton will play Saturday.

Coming into tonight’s game the Eagles are in fourth place in the Eastern Conference, five points back of Rimouski but with three games in hand. The Eagles are 35-17-3 (20-7-1 at home).

Saint John is also trying to move up the standings. Currently Saint John is in sixth in the Eastern Conference, and if one of the two teams moves up (but not both), tonight’s game will be a playoff preview. The Sea Dogs come into this evening’s game with a record of 27-28-1 (13-15-1 on the road). Saint John trails Charlottetown by four points for fifth place, but have a game in hand on the Islanders.

The Sea Dogs have been getting tremendous offensive production from their backend, as two of the top three scorers among QMJHL defensemen play in the Port City. William Villeneuve (54 points) and Jérémie Poirier (48 points) were both first round picks in 2018 and are producing strong numbers in their NHL draft years. Interestingly enough, while both players have less than 20 points on the man advantage, Saint John possesses a strong power play- particularly on the road, clicking at 25.5%.

The Eagles hope they don’t see that Saint John power play much, having been given nine penalties in the first 31 minutes Wednesday’s game against Bathurst. Eight of the nine kills were successful, boosting the Cape Breton penalty kill to 82.1% on the season.

Four players were absent from Wednesday’s game and the Eagles will hope to get healthy. After missing the loss to the Titan, the status of forwards Egor Sokolov, Mathias Laferrière, Connor Trenholm and defenseman Nathan Larose is unknown for this evening.