Eagles And Wildcats Set For Backend Of Home And Home 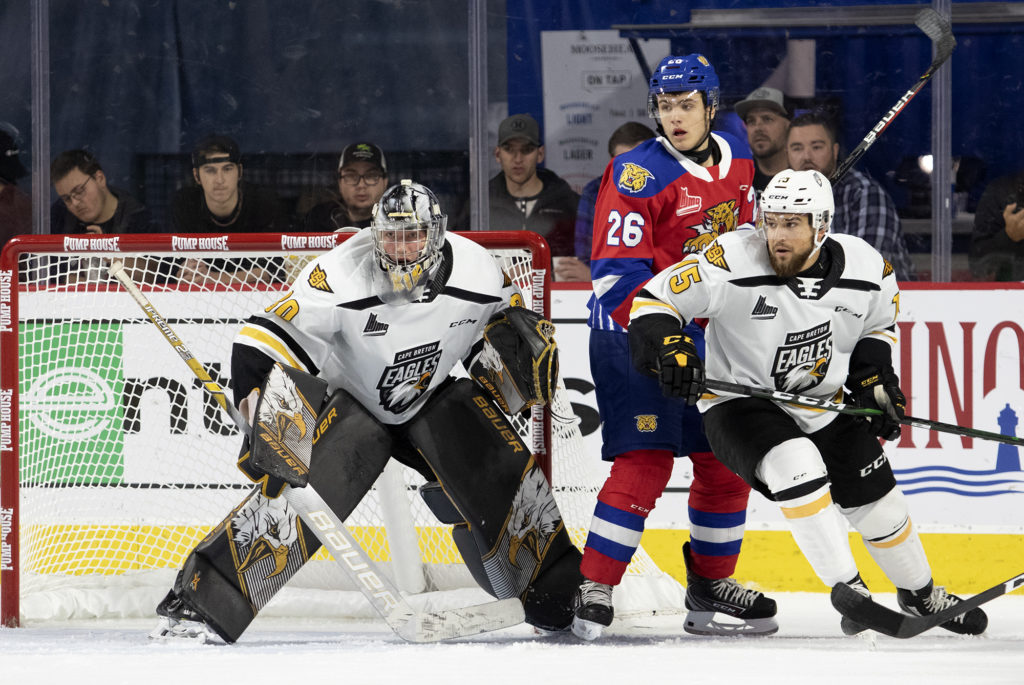 The Cape Breton Eagles will look to settle the score- and tie the standings- tonight in Moncton in a rematch from Thursday, the back end of a home and home series against the Moncton Wildcats.

The Eagles were on the wrong end of a 10-4 score against Moncton on Thursday at Centre 200. The shots were 39-34 in favour of Moncton, and both teams scored three goals in the last 40 minutes, but it was the opening 20 minutes that made the difference in the Wildcats victory. Thursday’s game was the second of the season between the two teams- Moncton won a hard fought contest, 2-1, at the Avenir Centre, in New Brunswick on October 9th.

Jakob Pelletier and Alexander Khavanov both scored twice in the Moncton win on Thursday night, and both players are averaging over two points a game through seven game point streaks. (Moncton’s Jeremy McKenna is also on a seven game point streak.) Moncton was able to get goals from eight different players Thursday night, and 14 of the 19 Wildcats players in the lineup recorded points.

Despite the loss on Thursday, the Eagles top line kept firing- Egor Sokolov and Ryan Francis each recorded three point nights, while Shawn Boudrias scored in the loss as well. Earlier this week Francis was named to the roster for the QMJHL for the upcoming CHL Canada/Russia Series. Sokolov, who will skate for Russia in the series, will mark a milestone in Moncton tonight as he appears in his 150th regular season game. It’s a city where Sokolov has had a lot of success, notching at least one point in nine of ten games in Moncton in his three seasons in the QMJHL.

Coming into tonight’s game, Moncton leads the Eastern Conference with a record of 13-3 (6-2 at home). The Eagles are tied for third with Chicoutimi, two points back of the Wildcats, with a record of 12-5 (6-2 on the road).

Cape Breton suffered another loss in the game on Thursday, as Kevin Mandolese sustained a lower body injury towards the end of the second period. While the Eagles will hope for a quick return for their starting goaltender, he did not make the trip to Moncton and William Grimard will be backed up by Kenzie MacPhail. MacPhail plays for the Cape Breton West Islanders and was chosen by the Eagles in the sixth round of June’s draft.