Eagles And Wildcats Face Off For First Time This Season 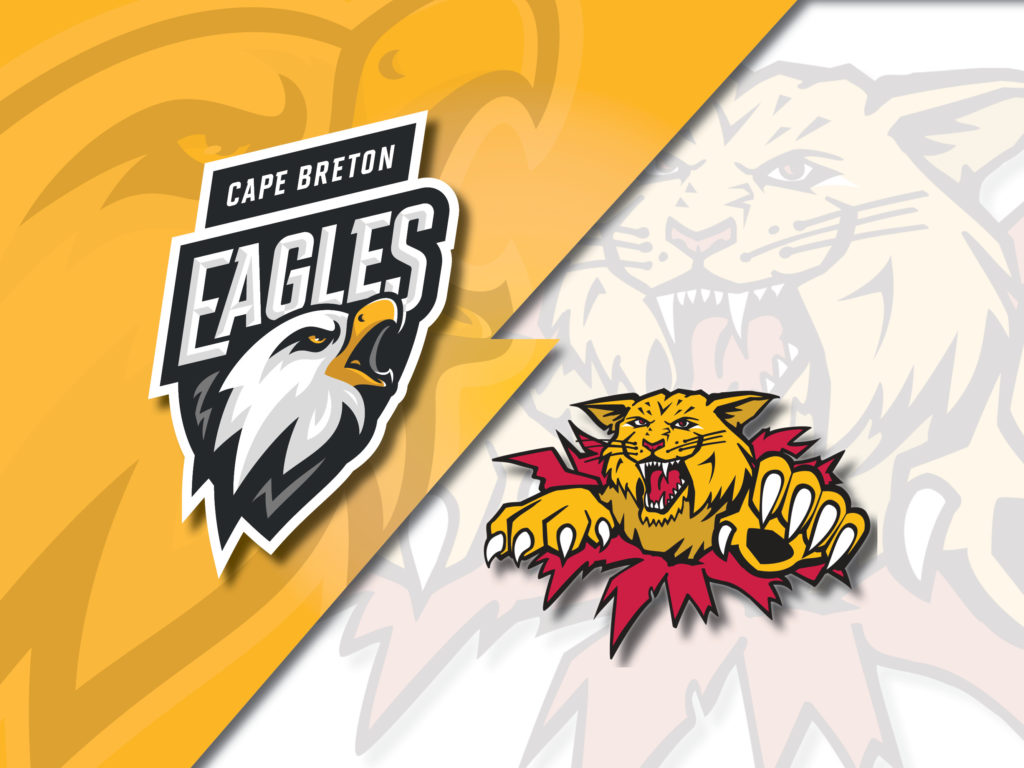 The Eastern Conference leading Cape Breton Eagles will face a big divisional test as they travel to Moncton to take on the Wildcats tonight.

Both teams are off to hot starts and are coming off big wins on the road against quality opposition. The Eagles rallied from down 2-0 to beat the #2 ranked team in the CHL Chicoutimi on Saturday (a 6-3 final), while Moncton dumped West Division leading Rouyn-Noranda 6-2. Currently the Eagles are 6-1, while Moncton has a record of 5-2.

It’s the their first meeting of the season between the two rivals. Last season the Eagles won five of nine meetings, with three of those victories requiring overtime.

Cape Breton’s top line is comprised of entirely players in the league’s top ten in scoring- Egor Sokolov in third with 15 points, Ryan Francis tied for fourth with 14 points, and Shawn Boudrias tied for ninth with 11 points. Francis is also the reigning QMJHL player of the week.

The Eagles are not just a one line team though, as Félix Lafrance and Brooklyn Kalmikov each had three points in the win in Chicoutimi. Kalmikov is returning to friendly confines in Moncton- last fall the Eagle forward became the first player to score a hat trick at the Avenir Centre.

Both teams have firepower- the Eagles have the most goals scored in the league with 38. Moncton has done its work on the man advantage- with a league leading 36% power play efficiency.

One forward who will not be playing for the Eagles is Cole Fraser, who suffered on an injury on Saturday and will be out for at least two weeks. Mathias Laferrière continues to be on the injured list but he did return to skating after practice on Tuesday.

A strong Moncton side will get a big boost coming into tonight’s game as Jeremy McKenna should make his season debut after spending the early part of the season in the AHL. The overage forward had 97 points through 68 games last year. On the opposite end of the age spectrum, 16 year old rookie Zachary L’Heureux, the third overall pick in this past June’s draft, is tied with Boudrias for ninth in league scoring.

The Wildcats have four NHL drafted players in the lineup- goaltender Olivier Rodrigue (Edmonton), defenseman Jordan Spence (Los Angeles), and forwards Alexander Khovanov (Minnesota) and Jakob Pelletier (Calgary). Pelletier, the captain of the Wildcats, was one of two QMJHLers chosen in the first round of June’s NHL Draft.

There could be another NHL drafted player in the Moncton lineup as multiple reports online on Tuesday cited that Axel Andersson had been reassigned to the Wildcats by the Boston Bruins. The 19 year old Swedish defenseman was chosen by Moncton in the CHL import draft, but Moncton had not yet confirmed the news that he was reporting to the Wildcats.