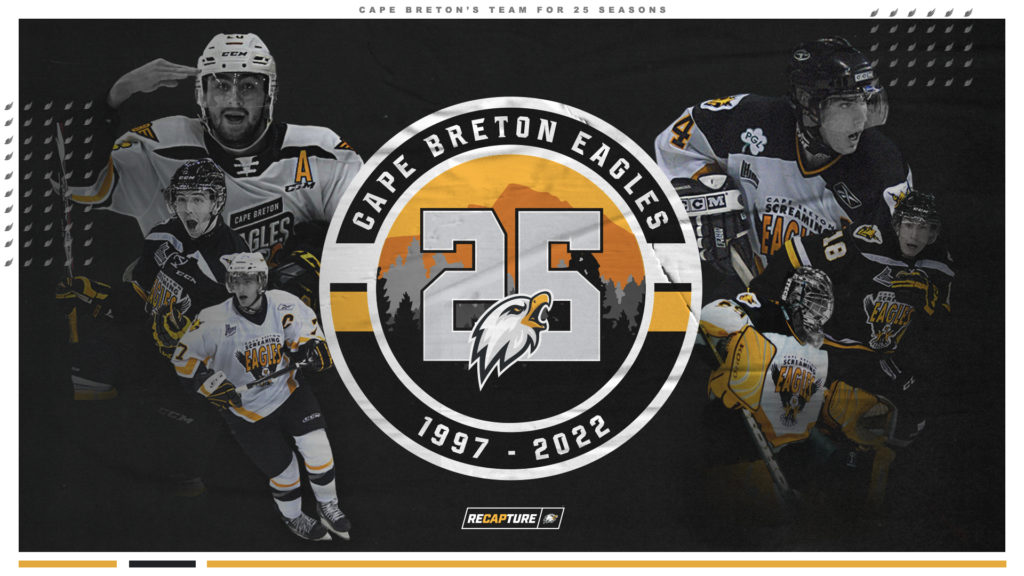 The Cape Breton Eagles are gearing up for the 2021-22 Season in celebration of 25 years and there are plenty of exciting things in the calendar to look forward to. Fans can expect to pay homage to the past 25 Eagles seasons, while also celebrating culture, hockey and some of the fantastic stories from across Cape Breton Island. Celebrations will kick off on August 16th as we take our Training Camp on the road to Glace Bay – a town with rich hockey history and passionate hockey fans. A list of other events will follow such as:

Of note, there are 4 new additions to the promotional calendar; 3rd Jersey reveal, Jersey Retirement, and the Cape Breton Heritage game. The jersey reveal will be a celebration of both the past and the future, and the design will marry some old with some new. The jerseys will be on sale prior to the game at the Eagles Landing Retail store both online and in person. Following the jersey game and Pink in the Rink, there will be another event in store for fans before the Holiday’s. Details will be shared in the coming weeks.

Secondly, we are excited to announce a jersey retirement ceremony that will take place in early February 2022. Fans can expect an announcement in September as to the recipient but it’s sure to be a fantastic evening at C200.

Last, but certainly not least, the introduction of the 1st Annual Cape Breton Heritage game in late February. Born out of the 25th Anniversary and the idea of celebrating our Island’s history, culture, and industry we are proud to introduce this annual celebration. Each season the Eagles will partner to showcase true Cape Breton Heritage – and for its inaugural season we are thrilled to announce our partnership with Membertou First Nation. On February 26th fans can expect to attend a celebration of both culture and hockey which will be amplified with custom made jerseys and socks designed solely by Membertou.

Fans are now invited to either renew or purchase their season seats through Ticketmaster. Information and step-by-step instructions on renewals and purchases can be found at www.capebretoneagles.com under ‘Tickets.’ Season seat holders can look forward to a jam-packed year and a special 25th gift to kick of the year. Flex packages will be going on sale in the coming weeks and fans can keep up to date on all ticketing information by following us on Facebook, Instagram or Twitter or by joining our mailing list.