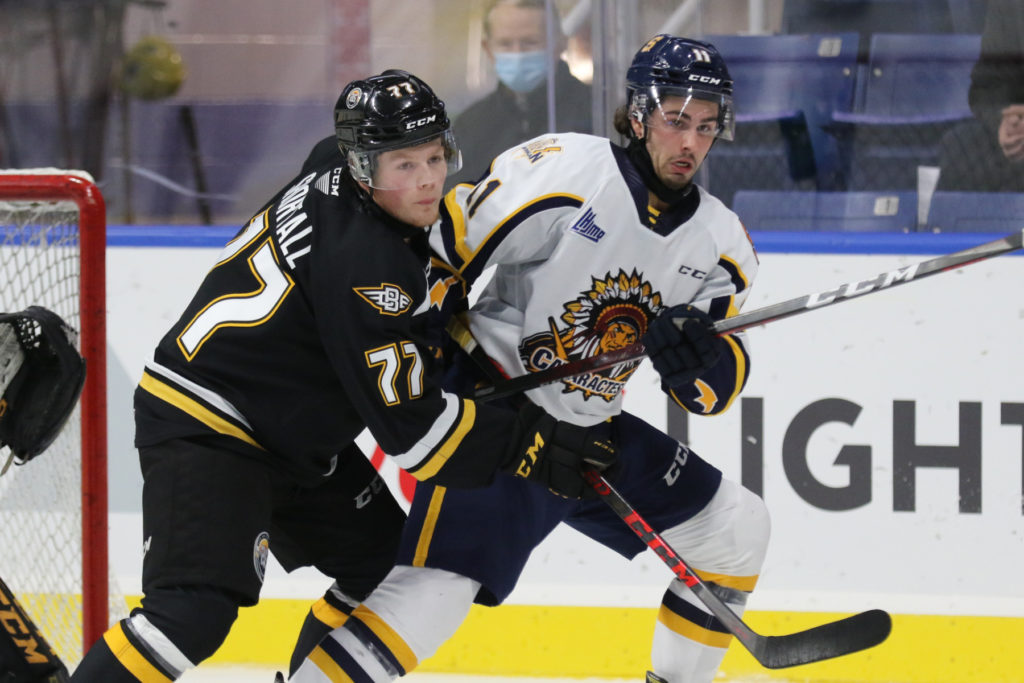 For the second straight game, the Eagles were edged out in overtime in a hard fought game against a powerful opponent. The Shawinigan Cataractes were victorious 3-2 in their lone visit to Centre 200 this season.

The Eagles took control of the shot clock early, outshooting the Cataractes 12-6 in the opening period. It was a swift first 20 minutes- with no goals or penalties.

Special teams would become a factor in the second period- although with each team taking advantage of the other team’s power play. Seconds were just ticking down from a Connor Trenholm penalty when Nicolas Girouard sped up the left wing and deked the game’s opening goal by Charles-Antoine Lavallée, giving the Eagles a 1-0 lead.

The next round of penalties didn’t give anyone a power play- a spirited scrap between Cape Breton’s Logan Camp & Shawinigan’s Owen Saye. Both players threw their share of rights, and Camp drew some blood from Saye but both players were able to return to play after their 15 penalty minutes.

The Eagles had an opportunity to expand the lead on the power play, but instead it was the Cataractes who pulled even with a short handed marker on a nifty deke from William Veillette. Exactly three minutes later Anthony DiCesare jammed the puck over the goal line after a lengthy scrum in front of the Eagles goal. In addition to the Cataractes taking a 2-1 lead in the second stanza, the Eagles got more bad news when Lucas Canning left the game with an upper body injury, and did not return.

The power play worked correctly in the third period and as a result the Eagles tied the game. A shot off the end boards came out to the side of the goal and to defenseman Angus Booth. Booth wasn’t able to handle the bouncing back and Girouard pushed the puck over the goal line to even the score. Not longer after, the Eagles were on the power play again, but couldn’t convert, and regulation finished up tied at 2.

There would be just two shots in the extra session before the game found a winning goal. Lorenzo Canonica flipped a shot from the sideboards that tricked Nicolas Ruccia and Shawinigan collected an overtime victory.

Charles-Antoine Lavallée picked up the win in goal, stopping 26 of 28 shots. Ruccia turned aside 25 of 28 in the loss.

The Eagles will now head out on the road for a pair of weekend games against the Saint John Sea Dogs, beginning on Friday night. Puck drop on Friday is at 7 PM. The game is available for purchase online at https://watch.chl.ca. You can also hear all the action beginning with the pre-game show with Patrick McNeil at 6:30 PM on 1270 AM CJCB or online at www.cjcbradio.com