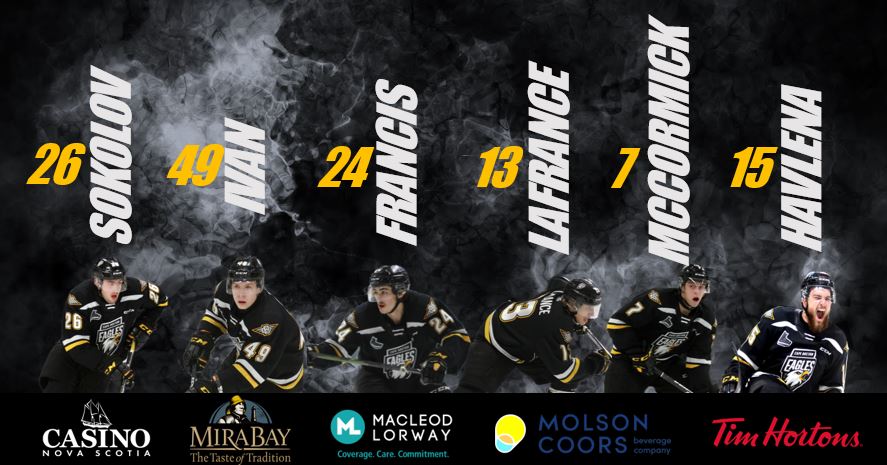 Earlier today, former Cape Breton Eagles star Pierre-Luc Dubois (now of the NHL’s Columbus Blue Jackets) announced five of the winners for the team’s 2019-20  awards on the team’s social media channels.  The results for those awards are as follows:

Eagles fans watched Egor Sokolov score 51 goals in his first two seasons in the QMJHL. Had he played in the final five games of the campaign as scheduled, the Russian star was on pace to become the first 50 goal man in the league in two years, and may have doubled his career total with this year’s output.

“He truly believes he can score every night and this year he pretty much did,” says Cape Breton Eagles coach Jake Grimes. “I don’t know if I’ve ever coached anyone who wanted to score and just play the game of hockey as much as Egor does.”

The third year forward got plenty of what he wanted in 2019-20.  Despite missing 11 games, Sokolov led the league with 46 goals- ten of them being game winners, also a league best.  Not just a goal scorer, his 92 points in 52 contests placed him third in the QMJHL, and the big winger hit the back of the net in 60% of the games he played in.  Sokolov finished with 11 multi-goal games.

Rookie of the Year Presented by Louisbourg Seafoods: Ivan Ivan

After being chosen 35th overall in the 2019 CHL Import draft, the Czech forward collected 22 points in 62 games in his QMJHL rookie season, including multiple game winning goals.  “To come over to Canada at  17 to pursue his dreams- we can only imagine is not easy. Ivan assimilated to our country and our league quickly though and played with the composure and intelligence of a veteran guy even as one of the youngest players on the team, “said Grimes.

Described by his coach as “one of the best penalty killers in the league”,  the 17 year old forward was used in a variety of key situations for the Eagles with his responsibilities growing throughout the year.  Ivan, the first Czech to suit up for the Eagles since 2012-13, represented his country at the Hlinka Gretzky Cup prior to coming to Canada.

Grimes predicts Ivan’s “offensive numbers will explode” next season.  “I can’t wait to see Ivan in camp after another strong summer of training.”

“We could absolutely write a book on this guy and his year,” says Jake Grimes.  Offensive ability already apparent, Ryan Francis took a big step forward in 2019-20.  He added 40 points to his total, notching 72 points in 61 games.  The third year forward placed top 20 in the QMJHL in scoring, and tenth in assists (with 48).

The native of Beaver Bank, a second round draft choice of the Eagles in 2017, also found himself in the national spotlight on multiple occasions.  Francis represented Team QMJHL at the annual Canada/Russia series, and skated in the CHL/NHL Top Prospects Game.  “He absolutely stormed on to the scene with regards to the NHL Draft, ” exclaims Grimes. “I have never seen a player in all my time in the CHL interviewed more and Ryan earned this with explosive offence and a solid two way game.”

The Bobby Joe Ryan Memorial Trophy Presented by Molson that is Presented to the Player or Players with the Best Sportsmanship: Félix Lafrance & Adam McCormick

“The ability to play with intensity and do whatever it takes to win without crossing the line and hurting your team is invaluable,” says Grimes.  The Eagle bench boss cites Félix Lafrance & Adam McCormick as “tremendous examples for players all around the QMJHL.”

After recording just six penalty minutes during his rookie season, Félix Lafrance was even more disciplined in 2019-20- taking just two minor penalties all season.  The sophomore forward was one of just two skaters to play more than 35 games with a number so low. And it was not from a lack of playing time- the former second round draft pick played on a variety of lines this season and collected 45 points through 63 contests.

Adam McCormick also spent very little time in the penalty box, but instead was on the ice helping his team.

Of defensemen who played 50 games, he was one of only seven to record 18 or fewer penalties.  The fourth year blueliner has just 60 penalty minutes through his 231 game career.  This year the New Brunswick native set a new Eagle record with a +45 ranking, and was productive on both ends of the ice with 33 points in 50 matches.

Grimes concludes, “I wouldn’t want to kill too many penalties without them. If I could have a team full of 6 Adam McCormicks on the back end and 12 of Felix Lafrance up front I don’t see us losing too many games.”

Having thrown 143 hits this year, the opposition knows Kyle Havlena.  “How he plays the game itself is an extension of Kyle as a person…he is a courageous leader, protector and giver that will do all the tough things to help his on ice family succeed,” proudly states coach Grimes.

Traded from his local team Blainville-Boisbriand over two years ago, the Eagles alternate captain has now made Cape Breton home. “Rarely have I ever seen attributes like leadership, helping others, boosting teammates, adding to your community and helping those in need…come so naturally to a person,” notes Grimes.   Partnering with teammates, Havlena has purchased two tickets for each home game for Cape Breton Regional Hospital pediatrics unit patients, and visitied those fans after the game- in addition to being very active in making school day visits to students around the CBRM.

“He no doubt comes from a great family and he makes people feel like family every where he goes,” Grimes added.  “He’s respected in our community and in every rink in the league.”

Other former members of the Cape Breton Eagles will be announcing the remaining award winners throughout the rest of the week.  Stay tuned to the Eagles website and social media channels for the results!