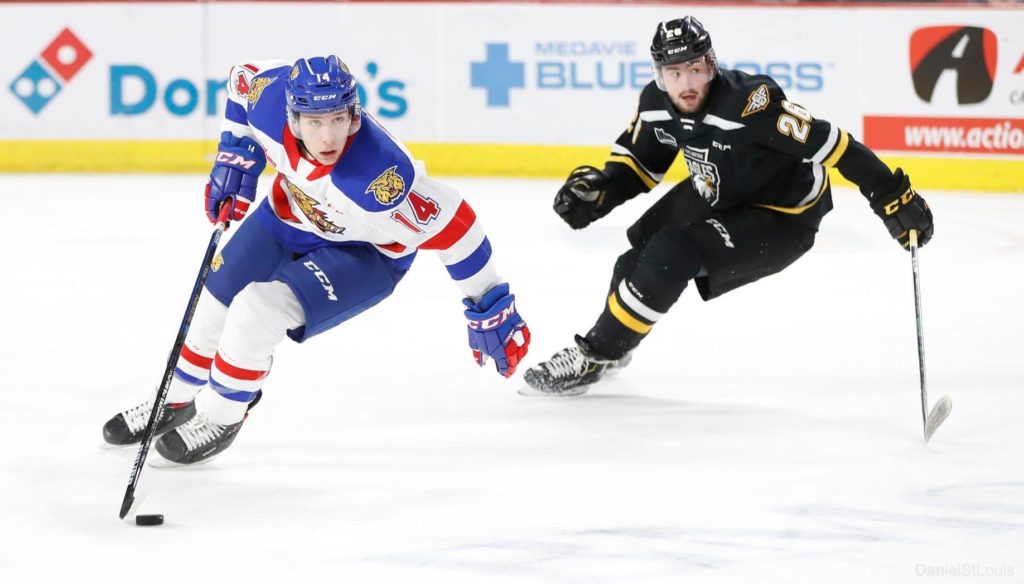 The Cape Breton Eagles’ seven game win streak ended on Sunday afternoon at the hands of the Moncton Wildcats in a hard fought 4-1 game at the Avenir Centre.

Penalty trouble for the Eagles was a story in the opening 20 minutes, as the team took the first four minor penalties of the game. The Eagles killed the first three off, and Ryan Francis was just skating out of the penalty box after the fourth penalty as Benoit-Olivier Groulx was releasing a one-timer shot of his stick that would beat Kevin Mandolese. It was not officially a power play goal but it did give Moncton a 1-0 lead.

78 seconds later the Eagles responded, as Mathias Laferrière finished a one timer from Egor Sokolov that knotted the game at one. However the Wildcats pulled ahead before period’s end when Philippe Daoust jabbed a rebound off Kevin Mandolese over the goal line and the period finished 2-1.

Both teams would have ample opportunity on the man advantage in the middle stanza, but it wasn’t until the final two minutes of the period that a power play connected when Jakob Pelletier finished a pass from Benoit-Olivier Groulx to push the edge to 3-1 in favour of the Cats.

Moncton’s defence was able to bottle the game up in the third period, holding the Eagles to just two shots. In the dying minutes the Eagles were given a chance when Benoit-Olivier Groulx was sent to the penalty box and Jake Grimes elected to pull Mandolese for a 6 on 4 advantage. But Tristan DeJong hit the empty net to seal the deal a 4-1 victory for the home side.

Olivier Rodrigue stopped 16 of 17 in the victory. Mandolese turned aside 34 of 37 shots in the loss in addition to the empty netter.

The Eagles are next in action for a pair of games on PEI, starting on Friday night at 7:30 against the Charlottetown Islanders. You can hear all the action beginning with the pre-game show with Patrick McNeil at 7 PM on 1270 AM CJCB or online at www.cjcbradio.com

Final Shots On Goal: 38-17 in favour of Moncton