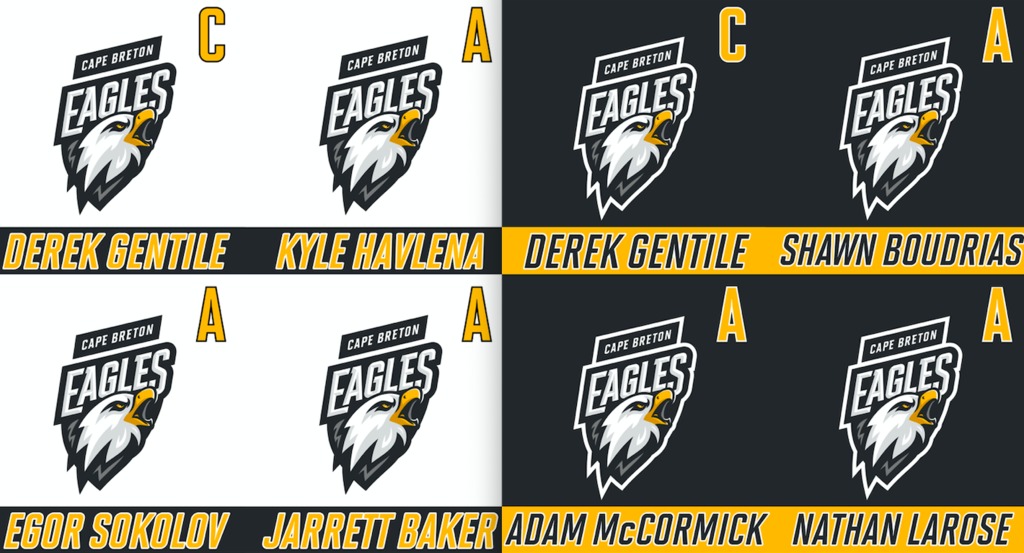 The Cape Breton Eagles have named 20 year old forward Derek Gentile captain for the the 2019-20 QMJHL season. The team has also appointed its alternate captains: Kyle Havlena, Egor Sokolov, and Jarrett Baker will wear “A”s during home games, while Shawn Boudrias, Adam McCormick, and Nathan Larose will wear “A”s during the away games.

“We are proud of how our team culture has developed,” says first year Eagles head coach Jake Grimes. “We have named the players who have contributed the most to our culture on and off the ice since the start of our training camp in August.”

Gentile, a native of Sydney who grew up attending Eagles games, is in his fifth season in the QMJHL. He was acquired last season in a trade with the Quebec Remparts. Gentile has recorded 31 points in 38 games this season.

Four defensemen are among those wearing letters. The 19 year old Havlena is in his third QMJHL season, having been acquired from Blainville-Boisbriand. He has a +11 rating with 17 points in 39 games. His regular defence partner Baker, also a 19 year old, was acquired from Drummondville in the off-season. Baker, who hails from Black Rock, has a +20 with 22 points in 38 games in his fourth QMJHL season.

McCormick is also in his fourth QMJHL season, all with the Eagles, has 24 points in 26 games. His +30 rating is tied for the top rank in the QMJHL. Larose, who was acquired from Saint John last season, is in his third QMJHL season. He has a +18 rating and 27 points (sixth among defensemen) in 37 games.

Sokolov and Boudrias are the other forwards who will wear letters. The 19 year old Sokolov has spent all three of his QMJHL seasons in Cape Breton. Having won a silver medal at the World Juniors, Sokolov has 55 points in 31 games, third place in the QMJHL. Boudrias, in his overage season, is also in the top 20 in QMJHL scoring with 45 points in 36 games. He is in his fifth QMJHL campaign, and was acquired by Cape Breton from Gatineau last season.

Grimes notes that the seven players who have been awarded letters have made “major contributions” to the 2019-20 version of the Cape Breton Eagles. “We thank you for your efforts,” says the Eagles coach about his leadership group.

Gentile will wear the “C” for the first time this evening as the Eagles take on the Saint John Sea Dogs. This evening’s game goes at 7 PM. Tickets can be purchased at the Centre 200 box office, by phone at 902-564-2200 or online at https://tickets.capebreton.ca/Online/default.asp Go Eagles Go!