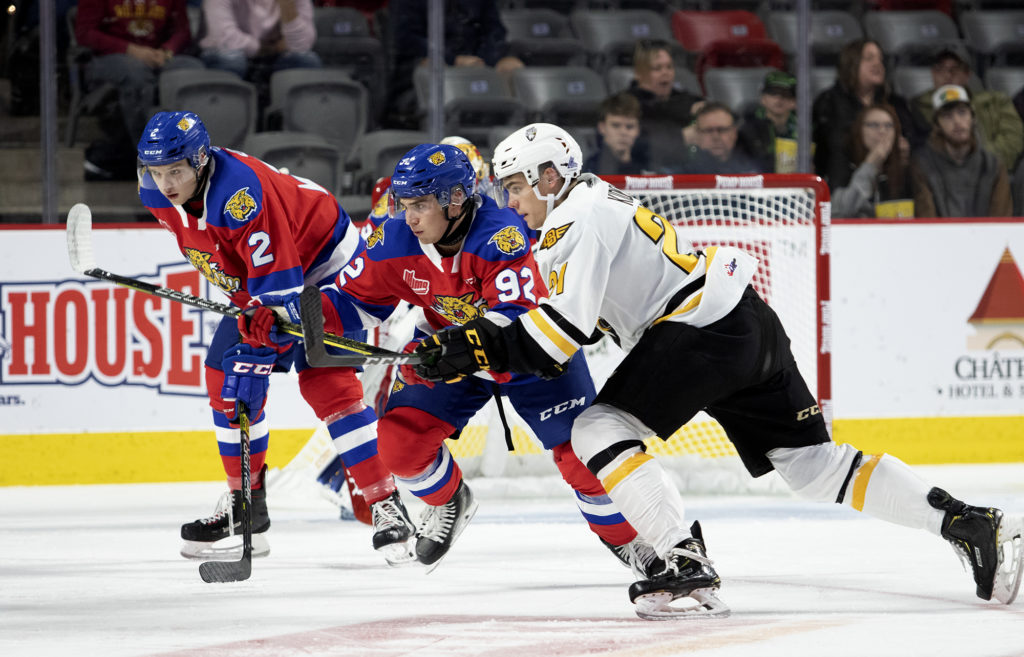 It’s Halloween, and tonight’s contest at Centre 200 features two teams who have spooked QMJHL opposition all season long. This evening’s game between the Cape Breton Eagles and Moncton Wildcats is a battle between the two teams tied for first place in the Eastern Conference. It’s also the first visit of the season by the Wildcats to Centre 200.

The Eagles are coming into tonight’s game having won six of of their last seven games, including a 7-1 rout in Halifax two nights ago. Moncton has won six consecutive contests, and prior to the winning streak won the only meeting of the season between the Eagles and Wildcats- a tightly contested 2-1 victory on October 9th in Moncton.

Moncton currently ranks ahead of the Eagles in the Eastern Conference by virtue of having played one less game. The Wildcats have a record of 12-3 (6-1 on the road), while the Eagles are 12-4 (6-2 on home ice.)

Tonight will be the first time Cape Breton will see Moncton’s 19 year old blueliner Axel Andersson since he reported to the QMJHL. The Swedish blueliner, a second round draft pick of the Boston Bruins, has six assists and a +3 rating in seven games since joining the Cats.

Both Cape Breton and Moncton are strong starting teams- the Eagles excel in scoring early, and Moncton preventing opposition goals early. The Eagles’ 25 first period goals are tops in the QMJHL, while the Wildcats have allowed a league low eight first period markers.

Between all three periods the Eagles have scored 77 times (also best in the league), and the offence goes beyond the potent top line of Egor Sokolov, Ryan Francis, and Shawn Boudrias. Playing on all Nova Scotian line with Liam Kidney and Derek Gentile, Shaun Miller has come alive to score six goals in his last six games. Gentile was promoted to the top power play unit on Tuesday in Halifax and produced a goal at first opportunity.

A pair of NHL drafted players- Alexander Khovanov (Minnesota) and Jakob Pelletier (Calgary) lead the Moncton attack with 25 and 23 points, respectively. The Wildcats will be without super rookie Zachary L’Heureux (18 points in 15 games) as he is away at the World Under 17’s- as is Cape Breton blueliner Jérémy Langlois.